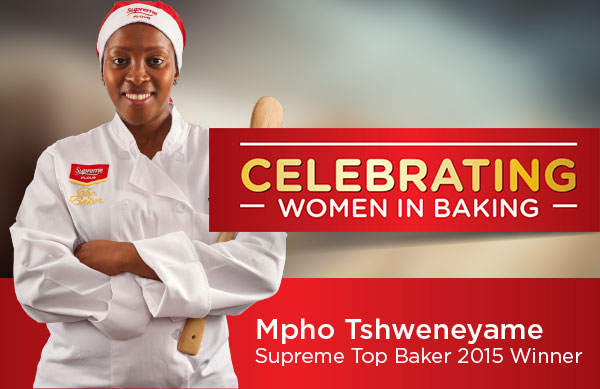 Mpho has been baking since she was about 9 years old, baking every day with her grandmother after school. In those early years, baking was not a passion, it was simply one of her chores. It was years later, after studying, working and becoming a mother, that her life took a different turn. She decided to take a break from her demanding job and ended up going to Germany for three intensive months to do a baking course. On her return home, Mpho immediately started her own business. She says, “I had to buy some products and ingredients, but I also went around to all the businesses I could think of, asking for samples! I baked every day and I’ve never looked back.”

Although Mpho loves baking bread “with all her heart”, she also bakes cakes, croissants and baguettes, working on orders. While it certainly hasn’t been easy building a business, she has repeat customers who refuse to go anywhere else for their baked goods.

Mpho read about the Supreme Flour Top Baker competition in the Sunday Times Food Weekly. For Mpho as a self-employed home baker, what could be better than winning a substantial cash prize and a fantastic bread mixer? Mpho’s dream came true when she was announced as the winner, with her delicious Breakfast Loaf getting her through to the finals. Mpho says, “Participating in the Supreme Flour Top Baker competition has taught me to never take my skill and what I know for granted – and don’t down play it. For any young bakers out there who are not sure whether to pursue a career as a baker or not, know that it is tough, but if it’s your passion, go out there and do it with excellence.”

Discover how to prevent and protect yourself from the COVID-19 pandemic here.